Day 2 of the Great Spring Blizzard: 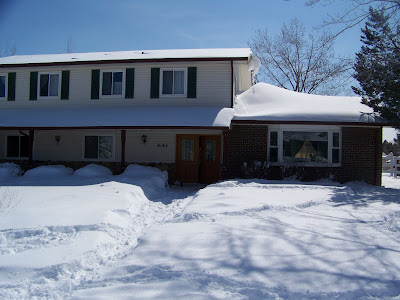 We sent the dog out again to look for the Wall Street Journal. He found it! And he brought it to the house! But then he tried to bury it in the snow. Isn't this fun?! 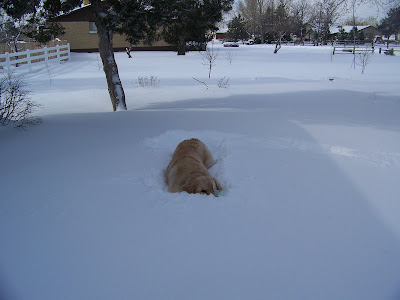 Next, dear husband goes outside to shovel the driveway. (This actually occurred about 30 minutes after Yours Truly went outside to shovel, in order to clear a path behind the car to drive Lizzy to work. Nevermind that there were drifts over 2 feet high behind the car and that the snow weighed approximately 25 lbs. per shovel-full. I'm a devoted mother and that's what I do. But I digress). 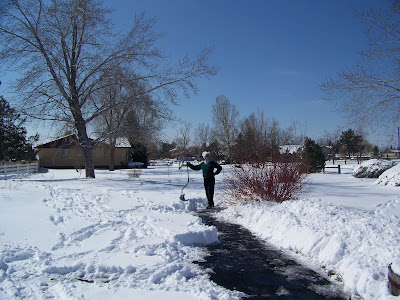 Yes, here he is, in all his manly splendor! Ya' gotta love a man that can look manly while shoveling a 50-foot driveway with a little-bitty shovel while his neighbors get out their man-toys (aka John Deere tractors with snow plow attachments) and rev up the engines and plow their measly 20 foot driveways in about 5 seconds flat. 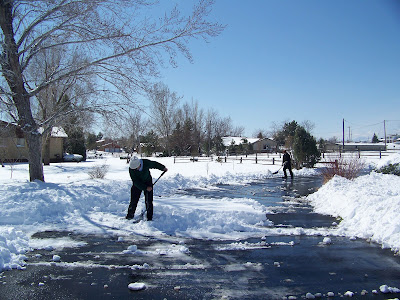 Let me tell you, that snow was HEAVY! Yep, it was the heaviest snow we've had to shovel here at Casa Nostra since we've lived here (that'd be about 6 years). We couldn't use our patented "snow plow" technique, which involves pushing the snow shovel back and forth across the driveway about 50 million times. No, we had to go with the old back breaking "lift and toss" technique which the Nazis banned years ago due to it's inhumanity.
It took three of us (dear huband Giuseppe, 15 year-old Edmund, and moi) THREE AND ONE-HALF HOURS to clear the driveway. As you can see from the pictures, the sun aided us by melting the snow as we were shoveling it, which caused it to stick to our shovels, necessitating a pounding action on the driveway with each shovel toss to knock the remaining snow off the shovel, only to be shoveled again with the next "lift and toss." 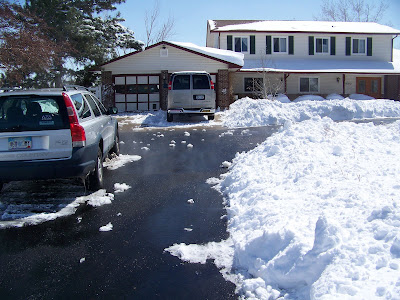 But when it was all done, we were proud of our handiwork and vowed to look for a new man-toy next time Sears has a sale. 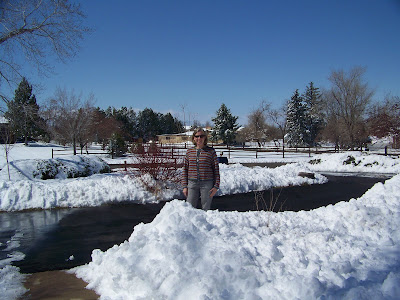 Yes, this is me smiling. I'm actually saying, "Could you hurry up and take the picture? I want to go inside and collapse!"

posted for your personal edification by MilitantMom on Monday, March 30, 2009

you worked your fanny off!! well done...

hope there was some hot cocoa or other lovely beverage imbibed afterwords...