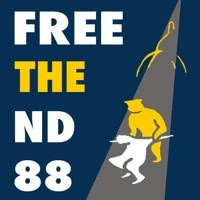 On May 17, 2009, the Catholic University of Notre Dame welcomed President Barack Obama as its commencement speaker and granted him an honorary doctorate. Pro-lifers across the country, both Catholic and non-Catholic, were stunned that a Catholic university that is named for the mother of Our Lord, would honor the most pro-abortion president in the history of the United States by giving him the podium at an important event such as graduation and by granting him a degree. Fr. Jenkins, the president of Notre Dame, was bombarded in the weeks prior to President Obama's visit, with requests to reconsider the invitation. Many observers think Fr. Jenkins was surprised by the outcry and was caught off-guard. Not wanting to give the impression of caving in to the so-called "right-wing" Fr. Jenkins not only refused to reconsider the invitation, he also refused to even meet with pro-life ND students.
As a result, many pro-lifers felt compelled to go to Notre Dame on May 17th to witness their displeasure with Notre Dame and to peacefully protest the president's pro-abortion policies. They were following in the footsteps of other non-violent protestors such as Dr. Martin Luther King, Jr. and Mahatma Ghandi. Fr. Jenkins had the protestors arrested and charged with criminal trespass, which could cost them each a year in prison and a $5,000 fine, not to mention the cost for many of them to travel to South Bend for all court appearances at every hearing.
The following is an online petition sponsored by the Thomas More Society, Human Life International and LifeSiteNews.com in response to Fr. Jenkins' refusal to ask that all charges be dropped against the pro-life protestors. The 88 protestors include Norma McCorvey, best known as "Jane Roe" in the landmark 1978 Supreme Court case, Roe v. Wade, an elderly priest, and two mothers from Denver. A list with biographies of some of those arrested can be found here.

Right now 88 pro-life activists (known as the ND88) are facing charges for “trespassing” onto the University of Notre Dame in May of 2009.

It is a source of the gravest scandal that this situation persists with the active cooperation of Notre Dame.

The ND88 were arrested for peacefully protesting the university’s decision to honor the most pro-abortion U.S. president in history at this year’s commencement. In many cases, their “protest” took the form of walking on your campus, praying the rosary, and holding pro-life signs. For this “crime” they were specifically targeted by Notre Dame’s security police, handcuffed, and dragged away and put in jail like common criminals.

Now these 88 peaceful pro-life heroes, many of whom are elderly, are facing up to a year in prison and a $5,000 fine, in addition to the many hardships and uncertainties involved in the trial process.

And yet, there is an easy and completely painless solution to this unconscionable situation. You, Fr. Jenkins, on behalf of Notre Dame, could publicly request that the charges against the ND88 be dropped.

Not only is such a request likely be heeded by the prosecutorial authorities, but it would go a long way to restoring Notre Dame's tarnished image in the eyes of the pro-life and Catholic world.

Indeed, it is extremely shocking and disturbing that, despite repeated requests to do so, Notre Dame has not yet intervened in this way.

Our Lady’s University has no business cooperating in the prosecutions of pro-life individuals whose only crime is having prayed on the campus of a Catholic university, and standing up for those who cannot stand up for themselves.

Therefore we respectfully implore the University of Notre Dame to immediately and publicly request that the charges against the ND88 be dropped.

To read the online petition and to add your name to the list, please click here.
For the latest news about the case, go to the Thomas More Society website, who is defending the ND88.
On the sidebar you'll see a clickable link to another online petition. This one is from the TFP Student Action, which is "a project of the American Society for the Defense of Tradition, Family and Property. Founded in 1973, the American TFP was formed to resist, in the realm of ideas, the liberal, socialist and communist trends of the times and proudly affirm the positive values of tradition, family and private property."
posted for your personal edification by MilitantMom on Wednesday, February 03, 2010

Until I read this, I honestly had no idea that not only so many people were arrested, but that the charges hadn't been dropped yet!

What an outrage! I signed the petition. This may be bold and said out of anger, but Fr. Jenkins should lose his collar over this. A priest having peaceful protesters and another priest charged?? Ridiculous.
Gosh, this really gets my blood boiling.