On being a female veteran 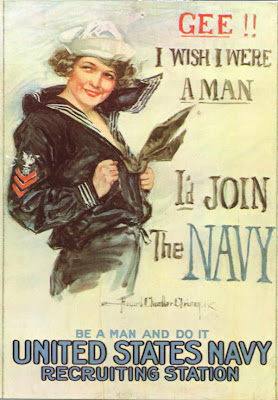 The following is from a National Review Online article from yesterday (Veteran's Day):

"For most, military service is a short period, a few years. But they may be dramatic and formative years, very significant for the life to follow. Some may look back on those as their best years. Others may not want to remember them. Most return from war unscathed if not unchanged, others with varying degrees of wounds, some physical, some emotional, or both.

The experience may shape and define one’s future, or not. But as a veteran you can be guaranteed a spot in the hallowed ground of Arlington or another of the national cemeteries. You can salute the flag (rather than placing your hand over your heart), whether in uniform or not. More importantly you will have the satisfaction of having done something exceptional, something you share with over 23 million Americans. (Only 7.2 percent of American men are veterans, and if you are a female vet, you are in a more exclusive club of 1.8 million, or six tenths of a percent of the US population.) And you will enjoy the admiration of a country that recognizes your sacrifices and is grateful."

Perhaps most surprising to me was the fact that only 0.6% of the population are female vets! I don't think of myself as such a small minority since I know quite a few female vets and am part of a Yahoo email group of female Naval Academy grads (an even smaller group) that has 626 members.

Being a mom in the military was tough. I had two babies (ages 1 and newborn) that I had to get ready for daycare and drop off at two different locations for about 6 months. Later, my neighbor across the street on Bolling Air Force Base, was able to watch both my kids for me. This made my life tremendously easier for me during my last year or so of active service. I was so indebted to her that I named my next baby after her and asked her to be that child's godmother!

I often wonder why I didn't just stay in, or stay a drilling reservist. I know several military moms who did just that. They can proudly say they served their country for 20-some odd years in uniform while juggling the stresses of military service, marriage and kids. They are just some of my mom-heroes.

I wasn't called to that level of sacrifice. I chose to instead give myself completely to having a whole passel of kids and homeschooling them, while moving with my husband's job to 5 different locations after I got out of the Navy.

posted for your personal edification by MilitantMom on Wednesday, November 12, 2008