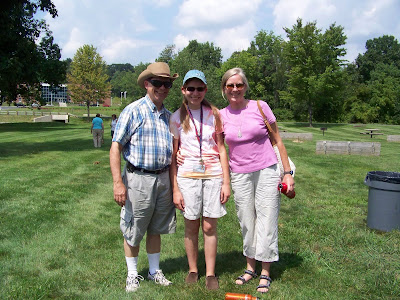 Day 1: all smiles upon arrival at DeSales University


We just arrived home in Colorado after dropping off our daughter to begin her freshman year at DeSales University.

She was able to move-in a few days before the regular move-in day because she signed up to attend a "pre-orientation service opportunity" with the campus center for social justice. They had about 30 or so kids who came early and a few peer mentors from the upper classes. The kids worked on a "Peace Garden" spreading mulch and pulling weeds. They also visited the elderly in an Alzheimer's unit of a nursing home, stocked a food pantry, and did some cleaning for different nursing homes and church-related charities. They also had some fun--movie night and mini-golf. 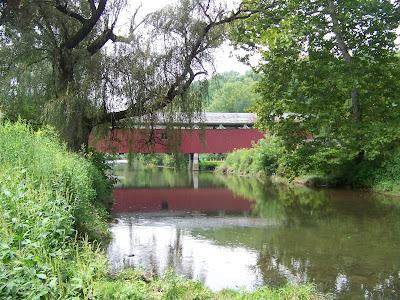 A lovely covered bridge over the Jordan River

While our daughter was doing her service projects, my husband and I took the opportunity to do some local sight-seeing. (The bus ride from Newark airport to the Allentown airport convinced us to avoid driving into NYC, as we had considered doing one day). We went on a covered bridge tour and did some wine tasting at two local wineries (one of which, Amore Winery , is owned by Dr. Greg Amore, who is a psychologist and head of counseling at DeSales). We also did some walking around historic Bethlehem, and a short hike at the Trexler Nature Preserve . Afterwards, we dined at the Schnecksville Diner. Their sign advertized: We make our own pies. They must've had at least two dozen different pies, but no pecan pie (my husband's favorite...I guess there really is a Mason-Dixon line!) 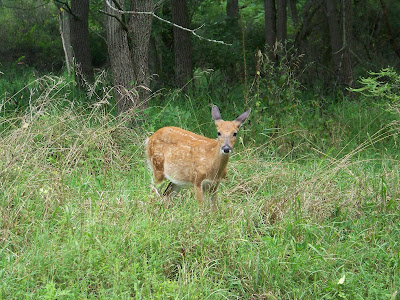 Wildlife spotted near the nature preserve

And we also spent a lovely day in Nazareth, home of the C.F. Martin Guitar Company, which we toured. (It's free!) And ate a lovely lunch across the parking lot from the factory, at a place the lady at the reception desk recommended. (Mivajo's Pizza; very good.)
All in all, we were very impressed with DeSales University and it's Catholic identity. However, it was rather disappointing to go to daily mass at the university and find there were only the three of us and one or two others in attendance. Once classes begin, the number of students attending daily mass goes up to about a dozen or so, but my daughter has already met some classmates who plan on going to daily mass together, so our hope is that the numbers will start to swell and they'll have to move out of the priests' house and into the regular chapel for daily mass. One of the priests who lives at DeSales is Fr. John Harvey, the founder of Courage . He can often be seen con-celebrating mass with one of the many Oblates of St. Francis de Sales who are in residence there.

Saturday evening was the opening mass and induction of the class of 2013. Father President Bernard O'Connor, OSFS, was the celebrant and he gave a wonderful homily about sacrificial love, service to God and others, and finding your true vocation. The field house was the site of the mass, which was attended by all 400 or so of the incoming freshmen, their families and faculty of DeSales. It was probably at least 90 degrees inside, but no mention was made of the air conditioning being broken, so I was left with the impression that they had no a/c in the field house. Despite the heat, the mass was beautiful and no one passed out.

The freshmen class was asked to stand and recite together their class pledge, which I will quote below:

As a member of the 45th class of DeSales University
I ask to be formed in the tradition of Christian Humanism,
As taught and promoted by this Salesian university.
I pledge to be an active part of my formation
Into the principled and thoughtful Christian Gentleman or Gentlewoman
That God has called me to be.

I seek to blend my love of knowledge with my love of God
And to continue to be open to the Mystery of Truth and Beauty,
I pledge to grow in the true strength a gentle character gives;
To pursue the good rather than to just avoid evil;
And to prepare myself to assume my unique vocation
As a mature believer, a responsible and global citizen,
And a co-creator of the Kingdom of God.

I pledge to be open to all learning,
Respectful of the God who is in me and in all others,
And to bear the good name of this university proudly
At all times and places.

I pledge to make a sincere effort
To understand myself more truthfully every day
So that I may, in turn, discern the movement of God in my life
And to treat others with the same dignity and compassion
As I should treat myself.

As I pledge my effort,
I ask for the support of family, classmates and friends,
The support and guidance of the University's Faculty and Staff
And, most of all, the support of my God.

May I grow in knowledge, wisdom and grace
So as to become the person I was created to be,
And to be that well,
For the good of others and the glory of God.

Fr. O'Connor mentioned the incoming freshman class had one member from India and "as far away as Colorado..." I think our daughter may be the only student west of the Mississippi in her class. We met many, many families who said they chose DeSales because other schools were "too far from home." The vast majority of the people we met were from an hour or two away. I hope this doesn't mean our daughter will be one of the few left in the dorms on the weekends! (Don't worry, Lizzy, I know you'll be a frequent guest at people's homes.) 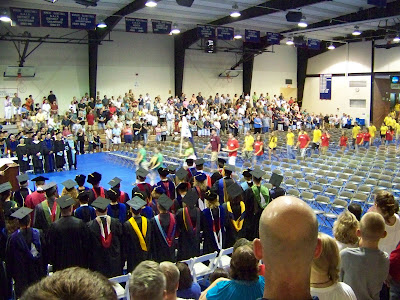 Two icons leading the procession into the field house for the opening Mass
The spirit of St. Francis de Sales is evident throughout the university. In the mass procession on Saturday evening, the freshmen were preceded by two students carrying large icons of St. Francis de Sales and St. Jane Frances de Chantal. All the dorms are named after Oblates. One of the dorms is a new and beautiful building named for St. Leonie Aviat, one of the founders of the Oblate Sisters of St. Francis de Sales. We left a rather sad and homesick young lady at a school that is 1700 miles from home. We are confident she is in good hands, but we pray the school's Catholic identity is ignited by the Holy Spirit and that more faithful Catholic families send their kids there. 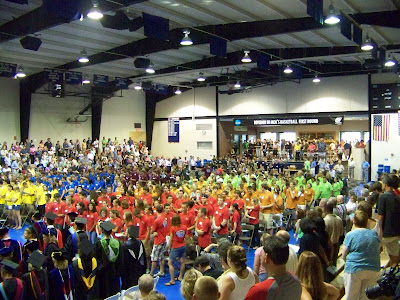 The freshman class of 2013: arrayed in their colored t-shirts for orientation

-->Late breaking update: Our Lizzy has since reported a huge increase in daily Mass attendance, as well as 25 or so students who showed up to pray the rosary outside an abortion clinic in Allentown this past Saturday. The pro-life student group is thrilled. Many of the students who came are new freshmen. 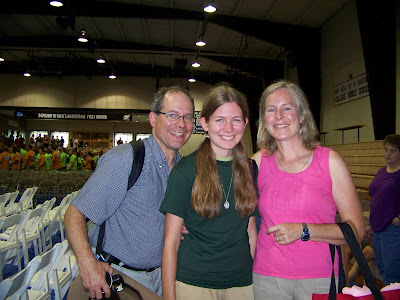 We love you, Lizzy!
posted for your personal edification by MilitantMom on Sunday, August 30, 2009

Awesome ... prayers headed to DeSales for Lizzy's continued enjoyment of college life. Kotch and friends headed to the beach after morning Mass on Sunday ... they ended up in the Everglades (went south instead of west) but had a blast anyway!

What a beautiful family you have, Debbie. Thank you so much for stopping by my little corner of Cyberspace and for your comments on my mixed marriage series. God bless!

I went to a de la salle St Helens....a great school with great teachers to whom I am eternaly thankful.