The making of a black belt

This video was taken by me, at our taekwondo studio, on the day of our belt testing. Edmund is seen here being attacked by two other black belts to test his sparring for his second degree black belt decided--for the fifth time. (Taekwondo also teaches perseverance!)

This video was also taken by me at our testing. In this one, Edmund has to break three boards. He only gets three tries. In all his previous testings, this was the thing that hindered his advancement.

We are so proud of you, Edmund!

posted for your personal edification by MilitantMom on Wednesday, June 24, 2009 No comments: Links to this post 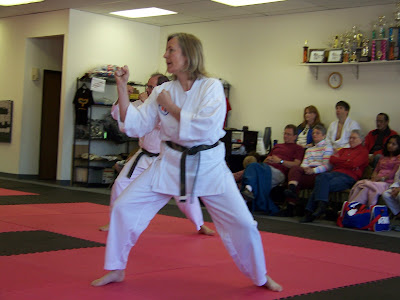 I never thought I would enjoy taekwondo sparring as much as I do.

Here I am: a 46 year-old mother of ten sparring with teenage boys who could really hurt me. But they're not.

They understand and try to follow the words we recite everyday before each class: "...I will practice in the spirit of Taekwondo; with courtesy for fellow students, loyalty for my instructors and respect for my juniors and seniors, Sir!" 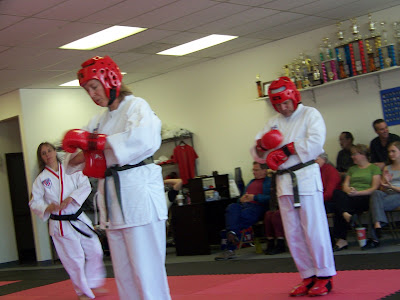 I know they're holding back; practicing restraint when they spar this old mom (who's older than most of their moms). I know this because I watch them spar each other and say a prayer of thanksgiving each time I see how hard they can kick.
Why am I enjoying this so much? I ask myself this question after nearly every class. Maybe it's a release of stress and frustrations. Maybe it's the adrenaline that surges through my body each time I face an opponent who could really hurt me. Maybe it's the sheer joy of doing something strange that I never thought I'd do. Maybe it's the relief each time the class ends and I haven't gotten a major injury. It's probably all of the above. 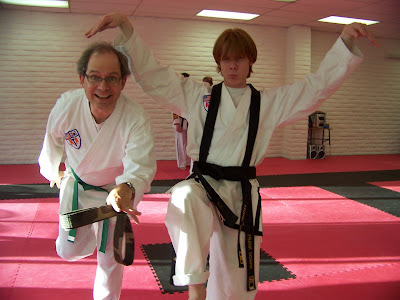 Granted, it's a lot more fun since most of my family members are doing it too. Once my #4 daughter leaves for college in the fall, everyone living at home will be in taekwondo: all eight of us! 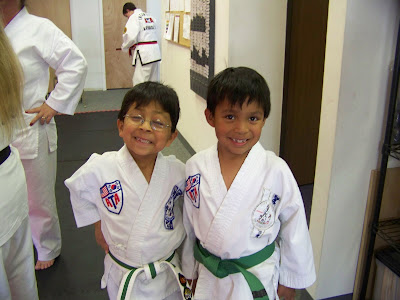 We credit our taekwondo instructors with helping our kids to learn better self-control, better discipline and study habits and certainly better physical conditioning. My #5 son has been involved with this studio for nearly 6 years and has recently achieved the rank of 2nd degree black belt decided. When he started he couldn't even do jumping jacks and he was a little squirt of ten years of age. He's now almost 16 and nearly as tall as the instructor. My, how time flies! 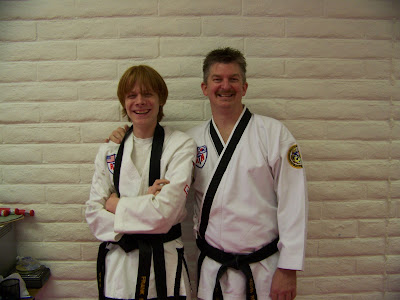 posted for your personal edification by MilitantMom on Wednesday, June 24, 2009 2 comments: Links to this post

Email ThisBlogThis!Share to TwitterShare to FacebookShare to Pinterest
Labels: taekwondo

The video that was here was deleted due to technical difficulties, but you can view it by following this link.
posted for your personal edification by MilitantMom on Thursday, June 18, 2009 1 comment: Links to this post

You wouldn't eat a kitten, would you?

People for the Ethical Treatment of Animals (PETA) has a new campaign to stop us from eating fish. They're re-naming fish. I couldn't make this stuff up if I tried, so I'll just quote from their own website:


...Whoever was in charge of creating a positive image for fish needs to go right back to working on the Britney Spears account and leave our scaly little friends alone. You've done enough damage, buddy. We've got it from here. And we're going to start by retiring the old name for good. When your name can also be used as a verb that means driving a hook through your head, it's time for a serious image makeover. And who could possibly want to put a hook through a sea kitten?

Aha! The REAL reason behind the campaign to rename fish sea kittens. (You may guffaw now.)

It turns out fishing is evil because it hurts the widdle sea kitties to have hooks driven through their furry (I mean scaly) little heads.

I suspect their campaign won't work too well on grown-ups who remember fondly the lazy Sunday afternoons spent torturing sea kittens with their dads then taking the carcasses home to their moms in order to indulge in their murderous cannibalistic rituals of devouring flesh. BUT the campaign isn't really designed for adults; it's for kids!

C'mon kids, let's go make our own virtual "sea kittens" on the "create your own sea kitten" page. Or let's read a bedtime story like this one called Playing Chase: (Again, I couldn't make this stuff up if I tried)...

Fred the Flounder is a sea kitten with an eye for fun and a nose for mischief.

Growing up, he spent all his time playing chase with the other sea kittens in his school.

But overfishing has left him morose and alone.

Now he just endlessly chases his tail, thinking of a happier time.

Something tells me someone at PETA has a sense of humor.
posted for your personal edification by MilitantMom on Monday, June 15, 2009 10 comments: Links to this post

How Christianity Answers Everything

What's So Great About Christianity by Dinesh D'Souza

I had the opportunity to hear Dinesh D'Souza debate atheist Christopher Hitchens at CU Boulder this past winter (see my blog) and I heard this book mentioned.

D'Souza takes the opportunity to go into great depth into the topics that were touched upon at the debate. When I first began reading this book, I though it was just going to be a retelling of the debate I heard, but D'Souza goes into much greater detail here and without interruption and snide remarks from Hitchens.

I am about half-way through the book now and thoroughly enjoying it! I put the book on my "religion" shelf, but it could easily go under something like "philosopy of science" or "metaphysics" due to the fact that D'Souza discusses the "Big Bang" theory, Einstein's theory of relativity and Stephen Hawking's A Brief History of Time, among other things. He also doesn't shy away from the question of Biblical creation story vs. scientific theories of evolution, the so-called war between science and religion and other topics that have plagued Christianity in the modern age, such as Galileo and Copernicus and whether or not the Church stifled scientific progress (answer: on the contrary, the Church is the reason man made scientific advancements).

I will write a more thorough review when I'm finished.

View all my reviews.
posted for your personal edification by MilitantMom on Wednesday, June 10, 2009 No comments: Links to this post

Poetic Knowledge: The Art of Knowing

Poetic Knowledge: The Recovery of Education by James S. Taylor

rating: 4 of 5 stars
My husband and I had the opportunity to meet Dr. Taylor and take him to dinner several years ago (1998 or 1999) when he was in Denver for a Catholic homeschooling conference.

We had a marvelous evening and learned so much from this man, who attended the Integrated Humanities Program at the University of Kansas which was a hotbed for Catholic conversions and making monks (dozens at Clear Creek Monastery in Oklahoma and the Abbey of Fontgombault in France), priests (Fr. James Jackson, FSSP) and bishops (e.g. Bishops Conley of Denver and Coakley of Salina, KS).

Dr. Taylor discusses the ideas of "poetic knowledge" as things we know with the core of our being, as opposed to things we learn by rote. For example, we know the smell in the air after a rain, or after the lawn has been cut. (Okay, so that's MY analogy, which is pretty poor...I read this book many years ago!) We are physical as well as spiritual beings and we need to learn with our whole beings, not just with our brains. Dr. Taylor's book is a wonderful complement to the Charlotte Mason approach to education as well as the Montessori approach (as taught by Maria Montessori and not by the dozens of New Agey schools that have sprouted up everywhere using her surname).

Not as delightful as sharing a bottle of wine with Dr. Taylor, this book may be the next best thing.

View all my reviews.
posted for your personal edification by MilitantMom on Wednesday, June 10, 2009 No comments: Links to this post 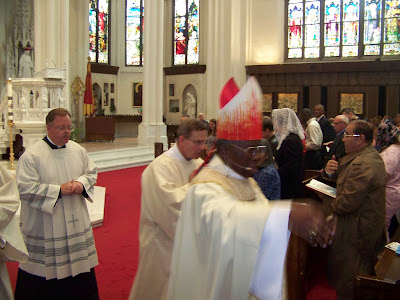 Yes, my fave Vatican offical (after da Pope) came to town a couple of weeks ago. Yes, I'm slow about posting exciting news. Just been too darn busy (or lazy).
He presided at Mass at the cathedral (a couple days after we made our pilgrimage there). We only found out about it because we were there on pilgrimage. (Yet another reason to go on pilgrimages more often).
It was marvelous to see Cardinal Arinze up close and personal and hear him laugh heartily with some families after Mass. Unfortunately, we weren't able to personally greet him afterwards as he was whisked away just as we made it to the head of the line.
My husband happened to be in Rome on the day of his consistory, May 25, 1985; that day there were 28 men elevated to the position of Cardinal. My husband was there because a former Navy Chief of Chaplains, John O'Connor, was being made Cardinal that day and the Navy chaplains at the base in Naples where he was stationed, had some tickets to the consistory. They all put on their Navy whites and drove up to Rome for the ceremony.
To this day, the part my husband remembers most clearly is the arrival of the Nigerian delegation. They processed around Vatican square before the ceremony began, beating large drums while carrying huge elephant tusks and blowing a ceremonial horn with a retinue of priests and nuns chanting and swaying to the drum beat as they went along. The Italians went crazy with cheers when they saw the joyful party pass by and no one seemed to notice the smart looking Navy men in their dress whites. But everyone knew the Nigerian delegation had arrived.
In case you haven't read Cardinal Arinze's bio, he was baptized at the age of nine, by the first Nigerian to be beatified, Bl. Michael Tansi. I kept thinking about that when I saw Cardinal Arinze...here is a man who was baptized by a blessed of the Church, who will probably someday be a canonized saint on the Roman calendar. Cardinal Arinze may be a canonized saint someday as well. And we will tell our kids and grandkids about his hearty laugh and the huge elephant tusks.
posted for your personal edification by MilitantMom on Tuesday, June 02, 2009 No comments: Links to this post