A Glorious Autumn Retreat: Then Comes the Fall 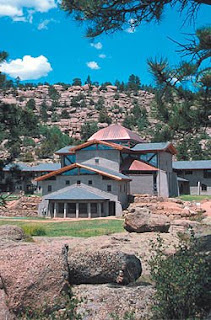 This past Thursday and Friday I spent a glorious day and a half at a Benedictine monastery retreat house in northern Colorado. I took my daughter, Elizabeth (16), and we attended a day retreat on Lectio Divina, given by the Mother Abbess, Mother Maria-Michael.

We thoroughly enjoyed the refreshing solitude, the exercise (walking 3/4 mile from the retreat house to the chapel several times a day for retreat sessions, liturgical prayers and Mass), and the spiritual renewal. We also enjoyed several walks on the grounds. We saw three bobcats when we walked the stations of the cross on Thursday afternoon!

We were also pleased to be able to visit with two groups of novices and their novice masters, who attended the same retreat as we. The Dominican novices from Denver, and the Holy Cross novices from Cascade.

We returned on Friday to a husband and 6 kids who were really happy to have us home.

Just when you think you have life under control.....

There goes the plumbing! 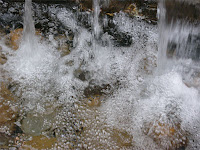 We spent the entire month of July and well into the month of August repairing major water damage in our downstairs study which was caused by the upstairs bathtub faucet malfunctioning. Water poured into the room below, and also caused damage to the interior closet in the master bedroom, which is adjacent to the bathroom.

We paid our huge deductible (ouch!) to our insurance company and let them assign a general contrator to oversee the reconstruction. This was after we hired a plumber to repair and replace the worn out tub fixtures.

WELL...Saturday night, dear Edmund (15, who is now residing in blessed solitariness in the former downstairs study), called our attention to some water that had mysteriously appeared on his floor. We immediately looked up to see if we could find the source of the water, since nearly all our children had bathed that day (in preparation for the Sabbath...aren't we squeaky clean?) It was quite a mystery, since there was absolutely no water stain on the ceiling or walls, but there was a definite pool of water in the middle of the floor, as if someone had spilled an entire glass of water! (This was the option I chose, since it seemed most likely).

Additionally, there was water on the carpet, underneath the radiator by the window. We haven't had the heat on since last winter, so it seemed unlikely that there was a radiator leak.

Even more bewildering, there was a small pool of water outside the window, on the stone ledge, and we'd had no rain, nor had anyone turned on the outside faucet...

I held to my opinion that it had been a small child with a wayward cup of water who had perhaps dropped the glass, splashing some toward the far wall, underneath the radiator, with the bulk of it on the floor.

But yesterday afternoon we discovered the real source of all that water. We decided to re-enact the scene of the crime by filling the tub with water (no children this time), and letting it drain, to see if any water reappeared. We filled it to the overflow spout and could hear the water draining down the pipes in the wall, but no water leaked. We then drained the entire tub, listening and watching all the while for any leaks. Still nothing.

"It must've been a cup of water," we thought.

Blogging momentarily interrupted by insurance company calling back to tell me I get to pay another deductible!

About 30 minutes later, Edmund calls me to come and take a look. There is water pouring from the ceiling fan (with light) in the center of his ceiling. It collected on the floor, the same spot we found the water the day before. ARRGGHH!

Update: the insurance company is notified; they in turn, notify the water mitigation crew, who is prepared to come out today and help dry out the ceiling and the wall and check the wiring on the electric fan. I try to get a hold of the plumber, so he can come out and locate the source of the leak.

God certainly has a unique sense of humor.

Sts. Michael, Gabriel and Raphael! Pray for us. Please watch over our house and guide the workmen as they seek to find and repair the cause of the leak. And please, help them fix ALL the problems so we don't have to do this again!
posted for your personal edification by MilitantMom on Monday, September 29, 2008 1 comment: