Still homeschooling after all these years!

It seems like forever and ever. I've been homeschooling my darling youngsters since about 1992. That's nineteen years, if you're counting. 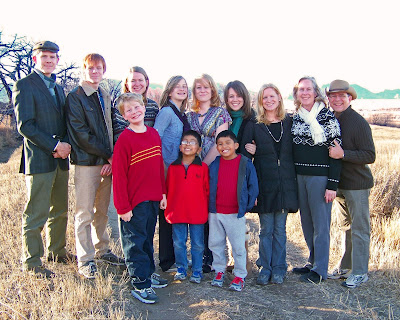 I hadn't even heard of home education until 1990. I remember reading an article called "Home-Grown Kids," by Raymond and Dorothy Moore in Mothering magazine. I was intrigued by what I read because it made a lot of sense to me, but they were ideas I'd never even considered. I remember assuring my husband as I read him excerpts from the article, "Don't worry. I'm not going to homeschool. I just think it's interesting."

Ahh, the sweet innocence of youth. Later that fall I heard about a Catholic homeschooling conference in Chantilly, Virginia. I believe it was the very first Catholic homeschooling conference. My husband and I attended the conference and we began to think seriously about venturing into the foreign territory of home education. I decided to start my eldest daughter a year early, so that if I messed up I could just send her to kindergarten the next year.

Our first year went smoothly. Better yet, we were happy, and even joyful. I started homeschooling the fall after having my fourth child. My kids were 4, 3, 2 and 9 months. I'm sure I went overboard in buying curriculum and workbooks and worrying about fulfilling requirements. But a funny thing happened while I was teaching my first daughter to read: her next younger brother learned as well. In between diaper changes, potty training, nursing and naps, we managed to fit in a pretty decent kindergarten program. We decided to try it for another year.

One year at a time. We decided to take it slowly and not think about high school or college or even two years down the road. We were just having fun getting through our ABCs and early readers. Addition facts followed, along with handwriting and Greek myths. (My kids loved the Greek myths. And they're still benefiting from their early exposure to the Greek myths. More about that in a future blog posting.) We tried to weave in our Catholic faith and stories of the saints along with the three R's. Some days it was a challenge just to have everyone clean and fed. At the time I felt like I wasn't doing it book perfect. I knew there were things I wanted to teach the children that I was leaving out. But we plodded on.

Nearly twenty years later, we're still homeschooling. We've thought about putting the kids in full-time school, and one kid went for one day once. We've changed our schedule innumerable times. We've changed our priorities. We've changed our curriculum. We've sought out professional help when we've felt it was needed. But it's still the best option for our family, at this point in our lives. And, best of all, I still enjoy being with my kids.
posted for your personal edification by MilitantMom on Monday, January 31, 2011

Thank you for this. It is good to read after all these years you would still make the same decisions. I have been homeschooling for 7 years. Our plan has always been year by year, but some days it seems like day to day.