The Miracle of Sharing: The loaves and the fishes 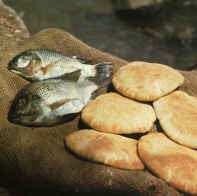 Today's Gospel reading from John 6:1-15 is about the miracle of the multiplication of the five barley loaves and two fishes to feed the five thousand. Or at least I used to think it was about a miracle of Jesus' multiplying loaves and fishes until I heard the homily today and learned it was all about sharing.

It turns out the miracle was similar to going to a parish potluck and finding lots of people but very little food. But as we let our guards down and open up and share what we have brought with others we find we are less concerned about getting our fair share and more concerned about sharing what we have with our neighbors.

Silly me! And all this time I thought it was about Jesus actually performing a certifiable miracle. I though it had something to do with prefiguring the Eucharist, where Jesus feeds us with His own flesh and blood.

Christianity itself is based upon a miracle without which there could be no Christianity. That is the miracle of the Resurrection. Catholics share in another miracle every day at the sacrifice of the Mass. That is the miracle of Jesus coming down to earth on the altar and becoming the bread and wine at Mass. He is truly present, Body, Blood, Soul and Divinity but because He cares so much for us, He takes on the appearance of bread and wine (so we won't be grossed out, I believe). This is what Catholics call transubstantiation, and it is one of the foundations of our belief.

So the God who became an Infant who died on the cross for us and rose again from the dead becomes bread and wine to nourish our souls as well as our bodies. But even He knew better than to try to feed 5,000 when they could've just shared what they brought with each other...right?

But then again, maybe that's just my parish. Maybe there are still others out there who actually believe the account of the loaves and fishes is a certifiable miracle, since it is the only miracle (other than the Resurrection) which appears in all four Gospels.

Here's what Steve Ray had to say about it.
(Note to Dear Readers: My husband says I'm being way too harsh and sarcasm doesn't become me, but I'm really hacked off right now, so please be understanding.)
posted for your personal edification by MilitantMom on Sunday, July 26, 2009

I don't think you have been to harsh. I hate hate hate that interpretation. Fortunately I haven't ever heard it in a homely. I wonder why people find it so hard to accept that miracles really do happen?

I would have been hacked off too! Our priest didn't mention the link to the Eucharist (or if he did it was so brief I missed it), but he did comment on it being the only miracle (yes, miracle!) in all four Gospels. The gist of his homily was God's extravagant generosity - he could just have multiplied the loaves and fishes into enough to go round, but he gave more than enough, with baskets left over once the crowd had eaten their fill. Something I had never thought of before.

I did hear it once, on our Engaged Encounter Retreat 16 years ago, from a Deacon when the priest didn't show up. We were horrified but that was in keeping with the rest of the retreat.
I think preachers are trying to be novel so they flesh out false interpretations in an effort to dress up what they don't understand or what they feel won't inspire people. In Protestant circles it's worse. They don't have a mandate from a Bishop to be preaching from a pulpit so they have to justify the congregation's finacial support each week. They have to come up with new interpretations or new analogies to keep folks coming back.